For many people, a classic image of Italy is a pizza maker throwing a disc of dough high into the air to shape it into a thin-crusted pie ready for tomato sauce, cheese and Italian sausage. For many Italians, the summer of 2022 has also been filled images of flying discs – but not of the dough kind. UFO researchers from the top of Italy’s boot to its spiked heel and on to Sicily have reported seeing an unusually high number of unidentified aerial phenomena this summer, and – despite an abundance of videos, photographs and reliable witnesses – they have few if any answers as to why. Let’s take a look at some of them and see if we can help.

“This year 2022 will be remembered as a year full of sightings, along the lines of the previous ones: in short, whatever other UFO centers and associations say, there are many reports, even arriving in the number of 10 in 24 hours, on the hottest days. The reports come from all over Italy, from north to south, from east to west and it is certainly interesting and to be monitored, that of the type of unidentified flying objects: flotillas, discoidal, spherical, very fast, slow, stationary, red, white , green, large, small, nocturnal, daytime, various colors, bright, non-bright, etc.” (Google translation)

Two good places to start are on the YouTube channel CUFOMCHANNEL and the website www.centroufologicomediterraneo.it, both of which are run by the UFO Investigation organization Mediterranean UFO Center (C.UFO.M.). On the website, C.UFO.M. founder and president Dr. Angelo Carannante reports on the wide variety of UFOs seen in his country this year with excellent photographs and detailed descriptions. On the YouTube channel, many of the photos and videos are shown in summary without the explanations. He notes that two cities in particular — Catania on Sicily and Mondragone on the west coast northwest of Naples – which have had a concentration of sightings.

“On 04/07/2022, the undersigned Massimiliano and my friend Antonio, we went to the sea, precisely at the free beach of Playa di Catania. We decided to make a video using an underwater mini cam. While we were taking a bath and talking about this and that, suddenly, in the sky, towards the horizon above the sea, a flying object, white in color, appeared. We initially thought it was a plane or a drone, but the object seemed rather strange to us. It was still in the air and apparently did not seem to move. Then, at some point, we lost sight of it. It was gone.”

This report came from Catania and the report included a green highlighted photograph of an object in a classic UFO shape with a bubble on top of a disc. Carannante calls Catania “a real crossroads for UFOs.“ In March, C.UFO.M. received another Catania report, this time from a father and son who photographed two objects “ few tens of meters above sea level” that the organization could not explain as “birds, reflections, stars, Chinese lanterns, satellites, aircraft, ISS, etc.”

“In short, the town of Mondragone is proving to be a hot spot from the UFO point of view, so we are collecting a real dossier. One of the sightings mentioned was made on June 14, 2022, at 10.30 pm. Before that, we remember an incredible sighting, also in Mondragone, published in June 2022, which had a sensational uproar, for the interest it aroused.”

Catania may be hot, but Mondograne is hotter when it comes to Italian UFO sightings in 2022. Carannante is particularly impressed with the report and photos (see them here) from Antonio Pisano, who he says is an experienced UFO spotter and photographer. One set of photos are of a UAP that “appears and disappears 50 times, changing light intensity, but also color: white, blue, pink, green. It literally disappears from one point and appears in another point, in the most complete darkness.”  Carannante hypothesizes that this UFO Is dematerializing and its movements are “also typical of UFOs, schizophrenic and irregular.” Again, he moves through the list of possible explanations and, by process of elimination, concludes that “the state remains a UFO, until proven otherwise.”

“In the distance, precisely on July 14, 2022, he saw a bright dot that gradually approached flying a few tens of meters above the ground and filmed it with his night vision device equipped with a camera. Given the lack of light, he consequently took infrared shots.”

It is impressive that Carannante has a cadre of experienced UFO spotters sending accounts and recordings to C.UFO.M.. The report above came from Mattiello Ernesto in the Lake Varese area in Lombardy in the north of Italy – he says Ernesto is “already known for his research” and it’ is obvious he knows how to switch between recording devices and adapt to conditions and lighting. Carannante notes that Lake Varese and other lakes in northern Italy seem to attract UFOs and also the increasingly popular “unidentified submerged objects.” 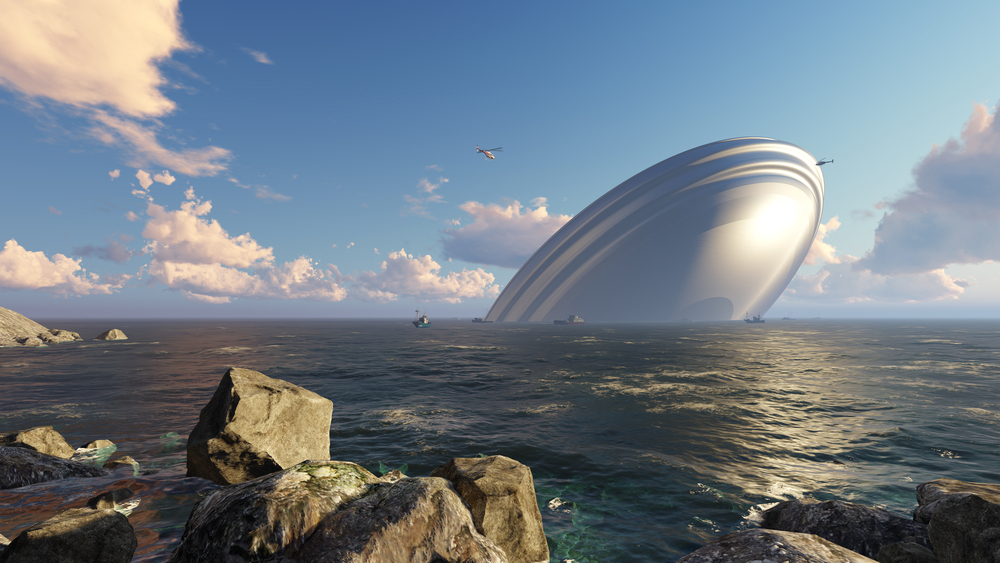 “However, the object was blazing fast and changed its direction challenging, in my opinion, every known physical law. In my opinion, no human aircraft can do so much. The unidentified flying object, filmed on May 30, 2022, from 9:27 pm and for about 15 minutes, appears pulsating green in the video, it was very visible also because there were favorable climatic conditions.”

Two witnesses saw and recorded this UFO in San Prisco, north of Naples. Unlike the others, this was a high-speed UFO with physics-defying maneuvers reminiscent of the Tic Tac UFOs encountered by U.S. Navy pilots. In fact, the witness described the UFO as “elongated.” Carannante reports that C.UFO.M. experts do not believe this was a drone because “the lights flash too frequently” and “the speed itself would be too high.”

“Another interesting UFO sighting took place in Sassuolo (Modena), on 24 July 2022, at 10.40 pm. A man and his wife, while they were on the balcony of the house, on the second floor of a building, intent on chatting, in a particularly silent evening, enjoying the light and pleasant breeze, while they were looking at the sky, they noticed, on their right, arrive three large luminous globes, very evident, flying in the sky above, proceeding from west to east.”

The photos of these orbs (see them here) flying in a triangle formation in north central Italy are of high quality and difficult to identify, so C.UFO.M. classifies it as a UFO. There are more reports and photos in  Carannante’s article and on the C.UFO.M. website, but it is time to stop and ponder why Italy was a hotspot for so many UFO sightings in the spring and summer of 2022. Could it be the result of so many people taking advantage of warm summer nights and work shutdowns to spend more time looking at the night sky? While there are military bases and drone flyers in Italy, C.UFO.M. does a good job of looking for their telltale signs. If you lean toward the “aliens” side, could these UFOs be attracted to Italy’s many active volcanoes – as is often given as the reason for so many UFO sightings in Mexico? Could they prefer Italy’s northern freshwater lakes to the ocean for underwater bases?

Special thanks to Dr. Angelo Carannante, his team of C.UFO.M. investigators and his informal collection of excellent UFO witnesses for an enlightening article on the many UFOs in Italy in the summer of 2022.

Post Views: 242
Tags: An Unusual Number of UFOs were Seen and Photographed in Italy in the Summer of 2022

The Rhodope Skull: Evidence For The Existence Of Aliens On Earth?