The Black Knight satellite is one of the greatest space mysteries in our recent time. Many believe that this enigmatic object is of extraterrestrial origin and has been orbiting Earth for more than 13,000 years. The Discovery of The Black Knight Satellite
The Black Knight satellite was first discovered in the early 1950s by US scientists and astronomers who thought it belonged to the Soviets. The Soviets, on the other hand, believed it was placed by the US.

In reality, none of them had the technology or ability to place satellites in orbit at that time, consequently leading many to believe it had to be of extraterrestrial origin, placed there to monitor our planet.

The US Department of Defense commissioned astronomer Clyde Tombaugh to look for it, and word quickly spread. A stunning article about the Black Knight was written in the St. Louis Dispatch and the San Francisco Examiner on May 14, 1954.

The account highlighted an conversation with retired Marine Corps Maj. Donald Keyhoe, who said that Earth was being orbited by one or two artificial satellites. He added that the government specialists at White Sands, New Mexico, were making every attempt to locate and outline these extraterrestrial satellites and to determine their origin.

The news report was written three years before the USSR launched the Earth’s first satellite – Sputnik 1, and the USA would follow a few years later with their own.

According to monitoring agencies worldwide, the Black Knight has been transmitting radio signals for over 50 years now. This led people to believe that Nikola Tesla was the first person who detected its signals.

In 1899, while experimenting at his Colorado Springs laboratory, Tesla announced that he had received extraterrestrial broadcasting signals from space. The science community laughed off his claims and immediately used this to discredit him and call him crazy. The existence of cosmic radio signals was unknown at that time, so this was expected, as Tesla was lightyears ahead of the scientific community.

While he was in Colorado Springs observing stationary waves, Tesla discovered strange radio signals from his receiver. After careful and thorough observations, Tesla concluded that these signals were not from Earth and were not natural. Instead, they must have had intelligent origin from somewhere or someone in space. Tesla reported this otherworldly communication and proclaimed his belief in extraterrestrials in February 1901 in the Colliers Weekly magazine in an article titled “Talking with the Planets.“

At that time, Tesla thought the radio signals were coming from Mars. Still, after discovering the Black Knight satellite, many believed that what Tesla heard in 1899 was coming from the mysterious spy-in-the-sky.

What is the Purpose of the Black Knight Satellite?
The Soviet Union and the USA have shown particular interest in this unidentified space object. Since its discovery, the satellite has excited many enthusiasts worldwide. In 1957, Dr. Luis Carlos of the Ministry of Communication and Information photographed it while taking pictures of Sputnik-2 as it passed over Caracas.

The strange thing looked nothing like Sputnik 1 and 2, and it didn’t even behave like any of our satellites. The Black Knight satellite orbited Earth from east to west. Sputnik 1 and 2 circled from west to the east, using Earth’s natural rotation to maintain orbit.

Interest in the Black Knight satellite was higher each year when in 1957, a mysterious object was spotted screening the Sputnik 1 satellite.

According to reports, the extraterrestrial object was in polar orbit. At that year, neither the United States nor the Russians possessed the technology to maintain a spacecraft in polar orbit.

The first polar-orbiting satellite – Tiros 1 was launched in 1960. Polar orbits are often used for Earth mapping, Earth observation, capturing the Earth as time passes from one point, and reconnaissance satellites. This would put the black night in the category of an observational satellite.

An Alien Satellite Orbiting Us

The only question here is who placed the Black Knight in our polar orbit and who is observing us?

Scientists and astronomers estimated the object’s mass to be over 10 tons, which would be, at the time, the heaviest artificial satellite to orbit our planet. In addition, the Black Knight’s orbit was unlike any other object orbiting Earth as it was moving twice as fast compared to any other man-made spacecraft.

At that point, people worldwide started identifying the object in the sky, which could be seen as a red light moving at a higher speed compared to other satellites in an east-to-west orbit.

The Grumman Corporation formed a commission to examine the data obtained from the observations made, but nothing was made public.

In 1963, American aerospace engineer Gordon Cooper was launched into space. In his final orbit, he reported seeing a glowing green object in front of his capsule in the distance moving towards his spacecraft. He reported the object to an Australian tracking system which picked up the unidentified object on their radar. The NBC reported this, but after Cooper had returned to Earth, the reporters were not allowed to ask Cooper about the unknown object.

Of course, the official explanation given by NASA was that Cooper experienced “high levels of carbon dioxide, which caused hallucinations.”

The Message of the Black Knight Satellite
Despite NASA’s attempt to explain what Cooper saw with a more mundane explanation, he continued throughout his life to divulge stories that detailed his experiences with UFOs and other unexplained phenomena. In addition, he often spoke of attempted government cover-ups guarding UFOs and unexplained activity, so it could be probable he saw the Black Knight realizing its existence was deliberately being withheld from the public.

In 1973 a Scottish astronomer and author Duncan Lunan wrote that he had discovered and deciphered a hidden broadcasting signal in outer space radio emissions that predate human existence.

“Start here. Our home is Epsilon Boötis, which is a double star. We live on the sixth planet of seven, coming from the sun, which is the larger of the two. Our sixth planet has one moon. Our fourth planet has three. Our first and third planets each have one. Our probe is in the position of Arcturus, known in our maps.”

It is suggested that the Black Knight satellite has always roamed the Earth’s orbit for thousands of years unbeknownst to men.

This mysterious alien satellite has been a topic of interest all around the world. However, to this day, most of the information on the mysterious object is kept safe and away from society.

No one has answered the questions who placed that satellite in our polar orbit and to what purpose.

Based on everything we’ve discovered on the Black Knight satellite, there are two theories. 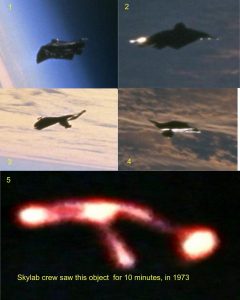 Theories of the Origin of the Black Knight Satellite

Extraterrestrial Origin
The first theory suggests that the Black Knight satellite is of alien origin and is placed here to monitor our species. It’s placed perfectly to orbit our planet and cover all of the landmass area of Earth, making it the perfect observational satellite.

Is it possible that an extraterrestrial race has been observing us for thousands of years? Studying us and surveying all of our activity?

They reached a stage in their history that allowed them to built satellites and reach the orbit just like the sage we reached. And exactly then, something happened that caused their extinction. Perhaps a global war or some other crisis. This event was so powerful that it caused humanity to restart it’s development.

What do you think is the purpose of the Black Knight satellite, and who placed it here?