On the evening of May 7, 2022 a rare red sky appeared in Zhoushan, Zhejiang Province. The local Zhoushan meteorological bureau said the red glow was simply the result of light, likely from fishing boats, reflecting off low clouds. But this explanation is too far-fetched.

Global Times reported people recorded the skies turning crimson red, from their houses, balconies, and streets. The videos and photos of the phenomenon went viral with more than 150 million views on Chinese social media platforms Sina and Weibo. 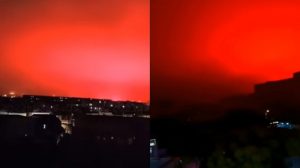 Many of the users termed the phenomenon a bad omen over the Chinese government’s handling of the Covid-19 in the country.

According to the report, the Zhoushan Meteorological Bureau explained, “When weather conditions are good, more water in the atmosphere forms aerosols which refract and scatter the light of fishing boats and create the red sky seen by the public.”

But not everyone believes in this version. According to UFOsightingshotspot.blogspot.com, if it was the case of lights of fisher boats reflecting off low level clouds, then that should happen much more often and people would know and recognize it, but that is not the case here.

According to ancient texts, in 1770, there was a bloody sky for nine days in many countries. In 2017, Japanese scientists published a paper in Astrophysics express, believing that the bloody sky event in 1770 was caused by large-scale solar activity.

This red glow is more something like the 1770 event or it could be a test of some sort of (space) weapon.