Nearly 200 ancient pyramids lie along the banks of the Nile River in eastern Sudan’s desert. For around 1000 years, they have housed the kings and queens who ruled the Meroitic Kingdom. Nubia is a region of the Nile Valley located in northern Sudan. The rulers of these ancient Kushite kingdoms, known as the “black pharaohs,” are supposed to have built the Nubian pyramids of Sudan of Meroë. From roughly 760 B.C. to 650 B.C., the five Kushite pharaohs governed Egypt from Nubia to the Mediterranean Sea.

There is a royal cemetery to the east of Meroë that is densely packed with about 50 sandstone and red brick pyramids of varying heights; several have shattered tops, a remnant of 19th-century European raiders. The royal city situated to the west of Meroë has the ruins of a palace, a temple, and a royal bath. Meroë’s global links are reflected in the architecture of each edifice, which draws on local, Egyptian, and Greco-Roman decorative styles.

The first settlements in northern Sudan stretch back 300,000 years. It is home to the earliest Sub-Saharan African kingdom, the Kingdom of Kush (about 2500-1500 BC). This culture created some of the most magnificent pottery in the Nile Valley, notably Kerma beakers.

Sudan was known for its abundant natural riches, especially gold, ebony, and ivory. These materials were used in the creation of several artifacts in the British Museum’s collection. During the Old Kingdom (about 2686-2181 BC), ancient Egyptians were drawn southward in search of these resources, which frequently resulted in violence as Egyptian and Sudanese monarchs fought to control commerce.Meroë is distinguished by almost two hundred pyramids, many of which are in ruins. They are the dimensions and proportions of Nubian pyramids. These pyramids, located on the Nile’s east bank, near a series of settlements known as Bagrawiyah, are much smaller but just as beautiful as the more famous Egyptian pyramids. The pyramids are named after Meroë, the capital of the State of Kush, an ancient African kingdom located in what is now the Republic of Sudan.

Following the fall of the 24th Egyptian dynasty around 1000 BCE, the Nubian Kingdom of Kush developed as the dominant force in the middle Nile region. From 712 to 657 BCE, the Kushite monarchs took over and dominated much of Egypt. When the kingdom’s capital and royal burial ground moved to the Meroë region in 300 BCE, the pharaonic tradition of building pyramids to encase rulers’ tombs continued here.

The French mineralogist Frédéric Cailliaud first brought the Meroë location to the attention of Europeans in 1821. Numerous intriguing and perplexing artifacts, including reliefs and paintings on the walls of the sepulchral rooms, were unearthed. An artwork depicting a giant of enormous size carrying two elephants was one such intriguing painting. 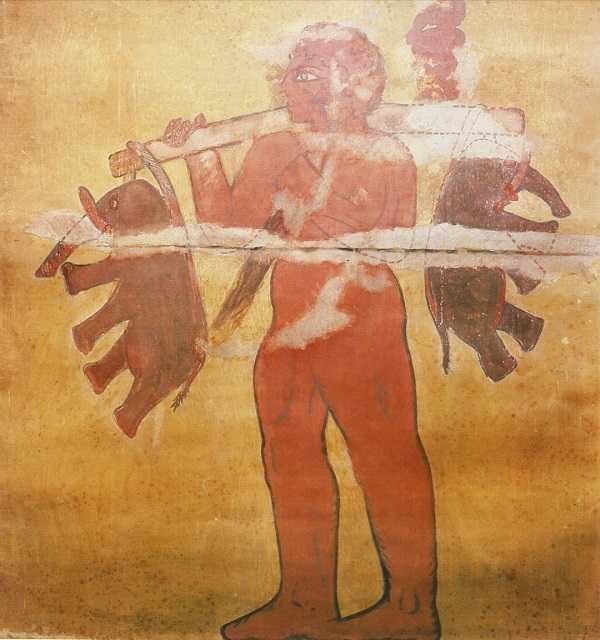 The Roman historian Josephus Flavius wrote in 79 AD that the last of the Egyptian giants lived in the 13th century BC, during King Joshua’s reign. He went on to say that they had big bodies and faces so unlike ordinary humans that it was amazing to look at them and terrifying to listen to their loud voices, which sounded like a lion’s roar.

Furthermore, several ancient Egyptian wall paintings represent the builders of the Pyramids as “Giant People,” 5 to 6 meters tall. According to experts, these enormous people were each capable of lifting 4 to 5 tonnes of blocks. Some of the ancient mural paintings represented huge kings governing ancient Egypt, while others depicted fairly little subordinates serving beneath the giants.

In 1988, Gregor Spoerri, a Swiss entrepreneur and ardent student of Egyptian history, contacted a band of ancient burial thieves through one of Egypt’s private suppliers. Spoerri met in a little cottage in Bir Hooker, a hundred kilometers northeast of Cairo, where he saw a gigantic mummified finger wrapped in rags. 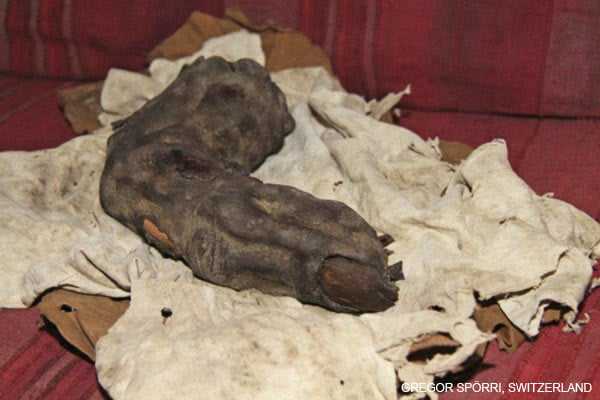 Spoerri described it as a strong-smelling, oblong-shaped bag with incredible contents. Spoerri was allowed to hold the relic and snap a few photographs because he paid $300 for it. He placed it next to a 20 Egyptian pound banknote for comparison. The finger was quite light and dry. Spoerri thought it was incredible because the monster it had belonged to should have been at least 5 meters (nearly 16.48 ft) tall.

One tomb raider provided a photo of an X-Ray of the mummified finger from the 1960s to confirm its authenticity. The find’s authenticity certificate was also from that era. Spoerri asked him to sell the artifact, but the burglar refused, citing its importance to his family. To put it simply, it was a family heirloom. As a result, Spoerri was forced to leave Egypt with nothing.

Later, Spoerri handed these images to museum representatives, who just waved him off. They all said that the finger did not fit into present beliefs, he stated. He returned to Bir Hooker in 2009 in search of the enormous mummy finger. But he could not track down the tomb raider. Sperry had been studying information about ancient giants for some time.

Spoerri was deeply moved by the discovery. He abandoned his work in 2008 to write a book about giants, which he eventually published under the title  Spoerri’s dreams inspired this magical historical thriller. He emphasizes that he did not write about the discovery in a scientific manner, leaving readers the option to form their own opinions.